Welcome back to our Community Buildings and Places series! This week, we’re going to look at places you might need to go in an emergency.

Wake County has several hospitals. In eastern Raleigh, you can go to WakeMed Hospital. In western Raleigh, you can go to Rex Hospital. In southern Raleigh, Cary, or Apex, you can go to WakeMed Cary Hospital. If you have a medical emergency, go to the Emergency Room (E.R.), or call 9-1-1. At the hospital, the doctors see people in order based on the seriousness of their problems. That means the doctors see people with more serious problems first. For example, if you are bleeding a lot and another person is bleeding only a little, the doctor will see you first. If you are having a heart attack while another person has a broken arm, the doctor will see you first. It doesn’t matter who arrived first. The person in more danger will go first.

To find an Urgent Care near you, search the internet for “urgent care near me.”

There are many fire stations in Wake County. You probably live very close to one. Fire stations are also safe places to go if you need any kind of help. Firefighters can:

If you have an emergency, you should call 911. DO NOT CALL 919. The phone number for emergencies is different in every country. In the United States, we call 9-1-1. Here are some instructions for calling 9-1-1:

If you do not speak English, just say, “Help.” Do not end the call. Stay on the phone, and wait for the fire department, police, and ambulance to arrive.

Discuss these questions with your classmates, or ask your teacher:

Every city and town needs a place for the local government workers to work. A city hall or town hall might contain offices for the mayor (the head of government in a city or town) and other government officials, and it may have a space where the city or town council can meet. This council is a group of people who make decisions for a community. They decide which projects are the most important. These projects could be parks, playgrounds, sidewalks, new buildings, libraries, garbage collection, street lights, or many other things. A large city or town hall could have an auditorium where members of the community can come for meetings. At these meetings, community members can talk about problems in their neighborhoods or projects they want to do to improve their community.

A municipal building is similar to a town hall, but it probably does not have an auditorium for town meetings. It probably only has offices and rooms for small groups, like the town council, to meet. Raleigh’s municipal building is called the Avery C. Upchurch Government Complex. It holds offices for city government administration, and Raleigh’s city council meets there. The building was named after a former mayor of Raleigh. It is located on Hargett Street in downtown Raleigh.

By Daderot (I took this photograph.) [Public domain], via Wikimedia Commons

A courthouse is a government building for a county (not a city). All kinds of “legal” things happen there. You will probably need to go to the courthouse if:

Judges and some kinds of lawyers have offices at the courthouse.

By Jim Bowen from Fort Worth, US [CC BY 2.0 (http://creativecommons.org/licenses/by/2.0)], via Wikimedia Commons

As the population of NC grew, we needed more representatives in our state government. We needed more people to represent us, more people to make laws for us. These people make up the General Assembly. They used to have their meetings in the Capitol Building, but now there are too many of them for that space, so they meet in the Legislative Building, which is also in downtown Raleigh.

The main character in the story is a man named Rip Van Winkle. He lives in the Catskill Mountains in New York, and everyone loves him. His only problem is that his wife always nags (asks or demands again and again and again…) him to do more work around the house. He is tired of listening to her, so one day, he walks up into the mountains with his dog. He meets some men who are carrying beer, and he starts drinking with them. He falls asleep, and when he wakes up, everything is different. His dog is gone. His beard is a foot long (about 30 cm). His gun is rusty.

Rip walks down to his village, but he doesn’t know anyone, and he thinks their clothes are strange. The houses are new, and the village is bigger. His own house is old, dirty, and falling apart. Rip notices that the people seem different. They used to be relaxed, but now they are very busy. When he left, there was a picture of King George III (King of England at the time of the American Revolution) in the inn, but now, there is a picture of George Washington (hero of the Revolutionary War and 1st president of the United States). Rip Van Winkle slept through the whole war! He slept for 20 years!

After such a long time, Rip’s wife is dead, and his children are adults. Rip used to be an important man, but the people in the village do not know him now. Finally, an old woman identifies him. Then Rip’s daughter takes him home to live with her family, and he spends every day at the inn, where he tells his story to everyone. Some people find him strange and interesting. Some people are jealous because he escaped his wife and slept through the war. Some people like hearing about the old days. But everyone knows his story.

Did you know that there is probably a library near your house? It’s true. Wake County has 20 libraries! Click the map to find the one closest to you.

The library is not just for books.

Yes, the library has LOTS of books for you and your family, but it has so much more too! Wake County Public Libraries have computers with internet access and FREE events for adults, kids, and teenagers. You can take a music class, join a discussion group, hear stories, learn job skills, work on your resumé, and more! You can also volunteer at the library. Just fill out the application, and take it to your nearest library.

How can I get a library card?

You must have a library card to use some of the library’s services. To get a library card, go to the nearest library with one of these:

Do you have a library card? How often do you go to the library? Find one event that you would like to attend at the library. Ask your classmates to go with you!

Many students know the history of Thanksgiving. Pilgrims (people who left England for religious freedom and new opportunities) moved to the northeastern part of the United States to start a new life. It was very difficult in the beginning, and a lot of people died. However, the British and the Native Americans became friends, and soon, there was enough food for everyone. They celebrated their success for three days in 1621, and that was the first Thanksgiving.

Here are some things you might NOT know about Thanksgiving:

This video includes all of the information I just gave you. Watch, listen, and see how much you can understand.

The answers to these questions are also in the video. Write a comment, and tell us which ones you heard!

Next Monday, May 26, is a national holiday called Memorial Day.  It is always celebrated on the last Monday in May.   On this day, we remember the soldiers and  Americans who have died while  serving in the Armed Forces .  We remember them in many ways:

Learn more about this holiday and practice the vocabulary used to describe this holiday at this site => ESOL Courses – Memorial Day    and at the El Civics  site.

and this video wordlessly makes us realize the tremendous sacrifice that our military service people and their families have made for America.

On a lighter note, Memorial Day creates a three-day weekend for many people and marks the unofficial start of summer. Many beaches and parks open up for the summer on Memorial Day week-end.

What will you do on Memorial Day?

Every third Monday in February, we take time to remember all the Presidents of our country and in particular we honor two very important Presidents of United States: 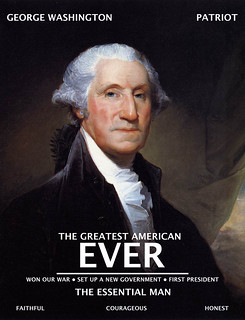 Washington helped create  the United States. He was the  leader of the American army during the American Revolutionary War.  He took an army of ordinary people (farmers, merchants) and successfully  defeated Great Britain, a  world power.

In 1783 , after  the war ended, Washington was  happy to go back to his family and farm at Mount Vernon. However the  nation soon needed him again.   In 1789, he was asked to be the first President of this very young nation. Washington really did not want to be president.  But everyone voted for him because of the trust they had in him. and he was voted in with 100% of the electoral votes. No other president has ever been elected with  100% of the  votes. He was “first in war, first in peace, first in the hearts of his countrymen”.

He did many great things for America during his presidency but maybe what he didn’t do is just as important.  He didn’t become an “king” and rule the  nation for life. After two presidential terms, he refused to  run again and nearly all American Presidents have followed his example. 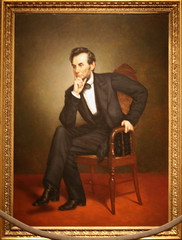 Lincoln kept the United States from breaking up into different countries.  The states in the North and the  states in the South had been arguing with each other for many years over slavery. Many people, mostly in the Southern states, believed that they could own people (slaves) as property.  Others, mostly in the Northern states, believed that this was wrong and slaves should be free.   Eleven  southern states tried to leave the union and form a new country, ” the Confederate States of America” and this began the Civil War.  The Civil War was the bloodiest war in American’s history where (over 600,000 people died).   This war not only divided the nation, but families and friends were on opposite sides of the battleground. It was a terrible time for the nation.

Lincoln, a wise and compassionate  president,  was able to lead the North to victory and the Union was saved.  During the war, he also ended slavery by first freeing slaves under  the Emancipation Proclamation and then by working with Congress to pass the Thirteenth Amendment to the Constitution that banned slavery from the nation.

He inspired the nation then and continues  to inspires Americans today with his vision of America  – “that this nation, under God, shall have a new birth of freedom—and that government of the people, by the people, for the people, shall not perish from the earth”

As you enjoy the day, give thanks to these Presidents and to all our Presidents who have served America .

To see  all the Presidents  look at this unusual video

Now check how much you know …. click on the link for  the Presidents Day Quiz

For advanced reading practice, here is an article from How Stuff Works that has a lot of great information. And if you just can’t get enough, here’s another one.

How do people celebrate Halloween in YOUR country?