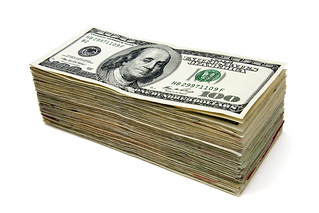 Americans have many different words and expressions to talk about money. If you’re interested in idioms related to money, here is a great post. This week, I’m going to give you some slang words for money.

What’s the difference between idioms and slang?

Slang words are usually just one word, maybe two. Sometimes they are normal words that have a different meaning, like “cool.” “Cool” normally means a little cold, but as a slang word, it means good or interesting. “Broke” is another slang word. Normally, it is the past tense of the verb, “break,” but as a slang word, it is an adjective that means not having any money.

Sometimes, slang words are totally new words. In 2015, many young people started using the word, “bae” (pronounced /bei/). It’s a word for someone you love, like honey, baby, or sweetie. “Bae” doesn’t have any other meanings. It is only a slang word.

Now that you understand the difference between idioms and slang, here are 15 slang words for money.